Doi Suthep is a mountain just outside of Chiang Mai. A songthaew from the Old City will run you 50 Baht (less than $2) each way and it takes about 30-40 minutes to traverse the steep, winding roads and get to the top. At the 5,500 foot summit you can get a good view of the city though it’s usually covered in a misty haze, and such was the case on the day we visited.

There is a temple at the top of the mountain and it is called Wat Phra That Doi Suthep. Wat means temple and Phra That means that it contains a relic of the Buddha. As such, it is an important pilgrimage site.

Once on top of the mountain you have to walk up a very long staircase to get to the temple. As with all wats, a couple nagas sit at the entrance to guard it from evil spirits. These nagas were as long as the staircase to the temple (at least a hundred feet) and covered with colorful, reflective tiles. This also helps with the evil spirits because when a spirit sees its own reflection it realizes how ugly it is and then it runs away.

Wats are actually a collection of buildings, not just one single building. There is a chanting hall, burial sites, living quarters, a school, and lots of smaller shrines. The chedi sits in the center and contains the most important relic. Everything is intricately decorated.

The emerald Buddha is the important relic in this temple. Legend is that the emerald Buddha was placed on the back of a white elephant which was then set free. The elephant walked to the top of Doi Suthep, turned around three times, trumpeted three times, and then laid down and died. This was taken as a sign that the relic wanted to be enshrined on the mountain, so Wat Doi Suthep was built.

Also on Doi Suthep is the Royal Palace. It’s actually the royal family’s winter home as they spend the rest of the year in Bangkok. Remember, this is the tropics so “winter” does not mean cold and snowy. It is actually the most pleasant time of year, with temperatures at 60-80 degrees and little rain. This means that the gardens were in full bloom. 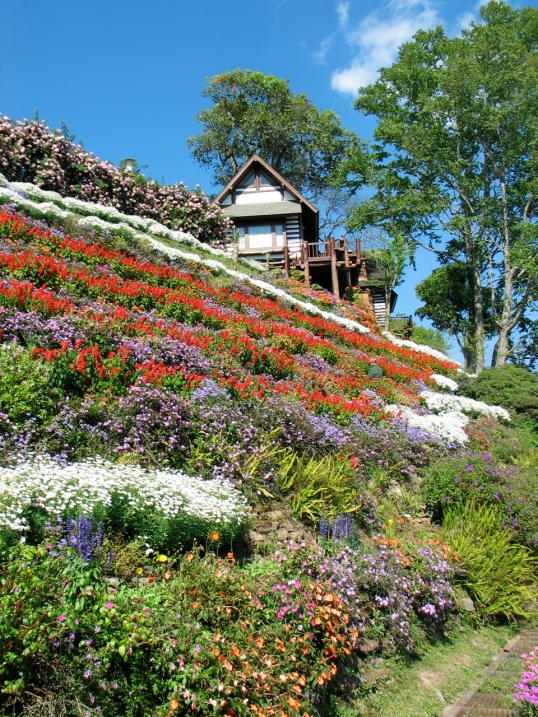 We didn’t get a good view of the palace itself, but that’s ok because the real show was the gardens.

They say that you haven’t been to Chiang Mai until you’ve eaten Khao Soi and visited the Temple on the Mountain. We’ve done the former many delicious times, and now we are glad to have done the latter.

One thought on “Day on Doi Suthep”

A little bit of forest therapy this past weekend.
The sun after the rain at a brewery in NH this weekend.
Raymond Ravioli and Frances Fettuccine, our neighborhood turkeys 🦃 haven’t seen these guys in quite a while and didn’t even see Frances up on the roof in that first picture until he jumped to the next roof #urbanjungle #southieturkeys #howdidyougetupthere
Little visitor to the big city gets a big donut 🍩 #kanesdonuts
Donating blood is fast and painless. It’s an easy way to volunteer and the need for blood is constant. You have good stuff that other people need. Consider donating blood and ask us if you have any questions!
Watch out!