Last weekend I traveled alone to Seattle for a conference. While I have flown to DC, Florida, and Wisconsin alone, there was always a friend waiting on the other end to visit and stay with. This time, I was mostly alone. And it was so empowering and confidence-building. Don’t get me wrong – I love traveling with David (home is wherever I am with him) – but this brought a different level of self awareness and push out of the comfort zone.
Upon arrival in Seattle, I got off the plane and navigated myself by train to my AirBnB – staying with Julian and his wife (who I dubbed as my Japanese parents). I headed to downtown to grab a shiny new green Pronto bikeshare bike.  And of course, the first street I went on was the biggest hill in the whole damn city – I could barely walk up it with the bike, nevermind ride. I rode around, went to a park and a bakery, then met up with a friend (ok, so I wasn’t completely alone) for happy hour. 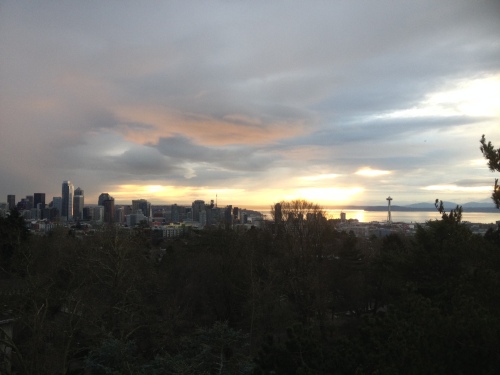 I had my revelation of empowerment on that first night. I was on my way back to my AirBnB, riding a bike down that giant ass hill, alone, at night, in a city I didn’t really know. The air rushed past my face as I sped down the hill and let out a “yeehaw!”. I didn’t feel anxious – I felt exhilarated. I had flown across the country and made my way around a new city. It felt good.

During the rest of the trip, I navigated bike share around the city, went out to lunch alone, and sat at a bar alone. I have always read things about how empowering it is (especially for a woman) to travel alone and be comfortable and confident in yourself to sit alone – and I was always like ‘yeah yeah ok, but I’d rather be with David instead’, not really comprehending the point. As I sat alone at a bar drinking a margarita snacking on tacos while drawing and watching gymnastics on the bar tv (I know, can you believe it?), I felt pretty proud of myself. Because, while I wished David was with me, I could do it on my own and be okay with it. 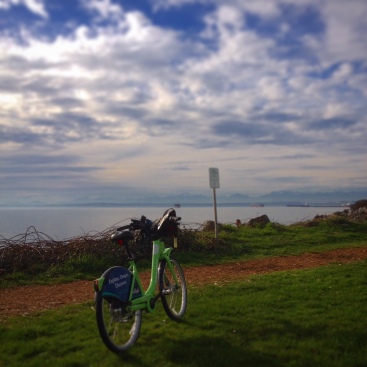 Was I acutely aware of myself as a woman alone? Yes. Was I unsafe or reckless? Did I feel unsafe? The answer is mostly no to both of those. It was calculated risk. We were in Seattle for a day on our honeymoon, so it wasn’t completely unfamiliar. I had a detailed bike map of the city. And stayed on the roads with bike paths/lanes. I’m pretty city savvy and street smart. I had a formal conference and network of people. I knew people in the city, including some folks from Boston attending the conference.

I get the feeling my little trip is just the tip of the iceberg for what they they mean when they talk about women traveling solo, but I’ll take it. Has anyone had any similar experiences? I highly recommend for anyone to try traveling on your own. It doesn’t need to be a trip across the country. It might just be taking a trip on the train to a nearby city and spending the day there alone. You will learn and grow and become more comfortable with yourself.

2 thoughts on “The Power of Traveling Alone”