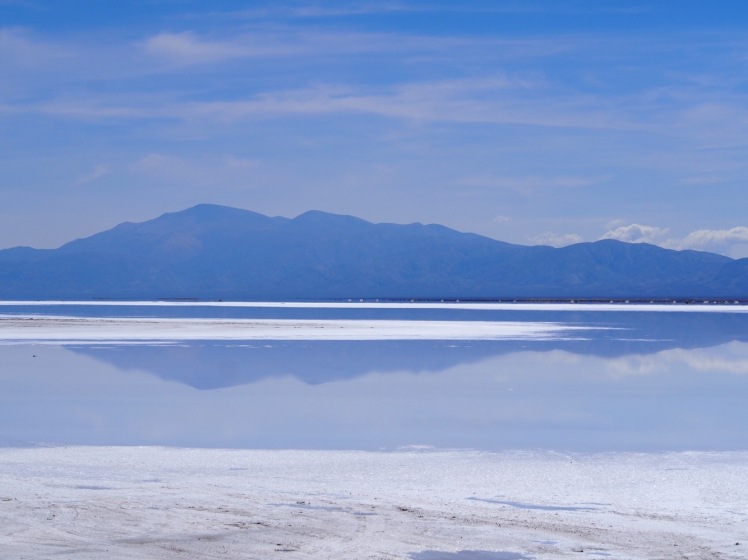 Ever wonder where your table salt comes from? Me neither! But if you live in Argentina there’s a good chance that the salt you eat came from the Salinas Grandes in Salta, the northwestern province of the country.

This region is unlike any other part of the country. There are deserts, high valleys, llamas, and Incan ruins. The drive from Purmamarca, the town nearest the Salinas, is breathtaking as you ascend 4500m (about 14,700 ft) up into the mountains.

Once you get into the mountains, you dip down to 3500m (about 11,500 ft) where you’ll find the salt flats. Long ago there was a lake here and when it dried up it left this unique landscape.

Even though the surrounding area is desert, it rains fairly frequently here which forms a thin layer of water over the salt and keeps it from blowing away in the wind.

Being at the salinas is like being on a different planet. First of all, it is incredibly bright with the sun in a cloudless sky reflecting off the water and the white salt. Also it is hard to breathe because of the elevation. Even doing simple things like walking or bending down would leave us out of breath. Of course none of this stopped Jenny from showing off her signature handstand.

The salt is about one meter (1.5 feet) thick and is harvested by cutting long rows out of the ground.

There are more salt flats in Bolivia, not too far from here, which people say are bigger and more grand. I guess we’ll have to save those for the next trip!

One thought on “Salinas Grandes: The Great Salt Flats”

My Mu and his monkey Giorgio ❤️ #mrmauiwowee
Last weekend we took our 13 year old niece and Maui camping 🏕 in NH. It was an action packed weekend that started with a float 🛟across our favorite lake🌊, followed by setting up camp, night time cards 🃏, a too long hike 🥾, fishing and swimming 🏊‍♀️ , and more fishing 🎣 . We almost left without catching a fish 🐟 but on literally the last cast of the weekend, Maddie got a fish!! It was very exciting!
On Thursday night we took our 16 year old (😱) nephew to the Red Sox game. This included biking to and from the game, dinner at Tasty Burger, and a float at our favorite lake the next day. Glad he’s still willing to hang out with us 🤓
We celebrated the birthday of #mrmauiwowee with 4 of his siblings this weekend. The celebration included this #jdncakes - a two layered naked cake with peanut butter filling and peanut butter cake, decorated with @milkbone They loved it!
Happy Birthday 🎉🎂 to this little animal 🐕 ! We love you #mrmauiwowee - one year old! And 6 months since we got you!
Love that dirty water ⛵️
Join 59 other followers