the adventures of a sabbatical! – currently in Scotland 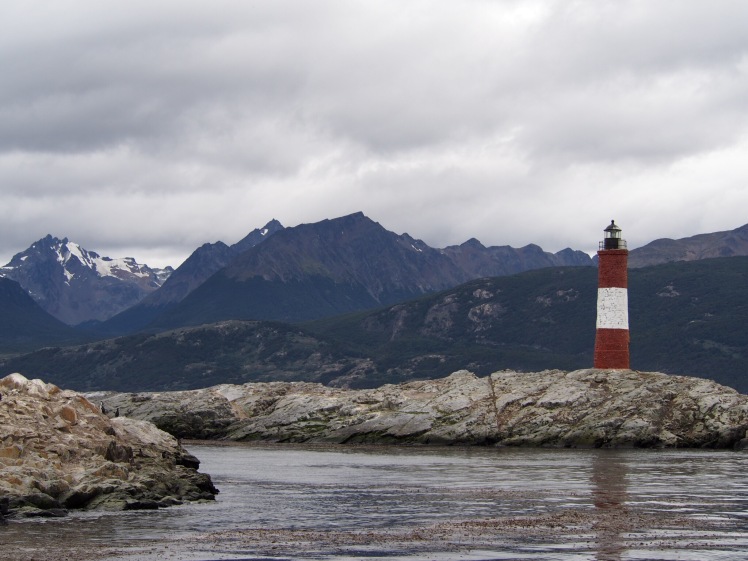 After a few days in Buenos Aires we hopped on a plane and headed as far south as we could go. This placed us in the city of Ushuaia, the southernmost city in the world and the closest place to Antarctica. It’s summer here and Buenos Aires can be very hot, but Ushuaia is much more mild at this time of year.

Ushuaia (pronounced ew-SWAI-uh) is in the province of Tierra del Fuego. Tierra del Fuego is Spanish for “Land of Fire” because the first European explorers to sail past the tip of South America saw campfires that were created by the native people. This area is also affectionately called “The End of the World”.

The city of Ushuaia sits on the Beagle Channel which connects the Atlantic & Pacific Oceans. It is completely surrounded by huge, jagged, snowcapped mountains. They’re everywhere you look peaking out over the tops of buildings. 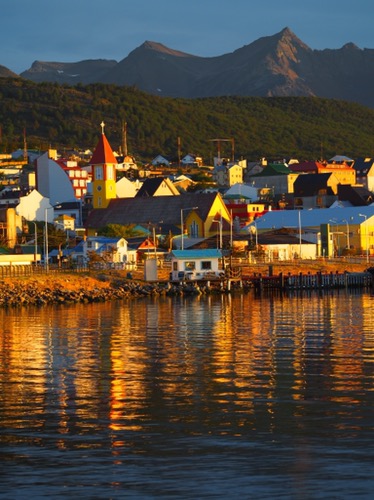 The weather here is predictably unpredictable. During our time here it was almost always sunny, but it was almost always raining. Usually at the same time. Wind can spring up from nowhere and clouds come and go every minute. We narrowly missed being caught in a hailstorm during one of our hikes on a “sunny” day.

There are two major things to do in Ushuaia. The first is hike up to the the Martial Glacier. If you’ve seen our pictures from the top of a glacier, well it’s not this one (but we’ll post more about that later). There are something like 40 glaciers in Argentina, so expect a lot of glacier talk. 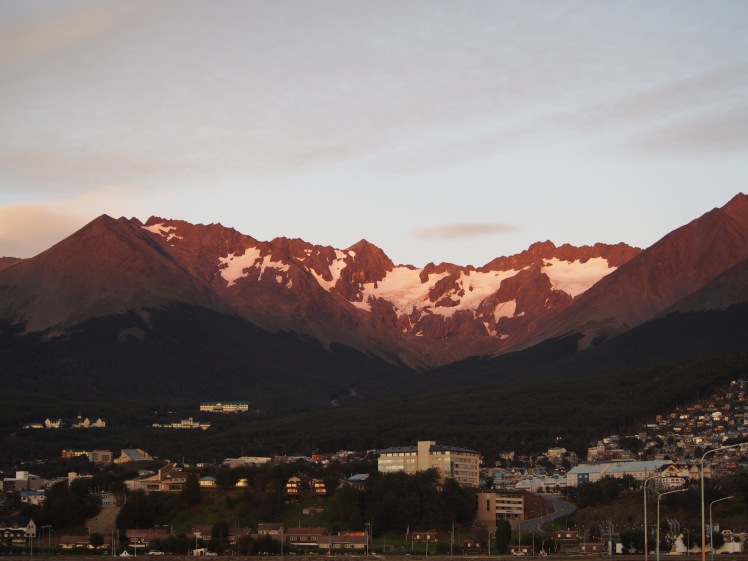 Anyway, the Martial Glaciar sits on a mountain overlooking the town. It is receding so it’s pretty small (as far as glaciers go) and we couldn’t walk on top of it. But the hike up to it was really beautiful. We walked through an alpine meadow, a ski lodge, and a lot of rock that had been moved around by the glacier. 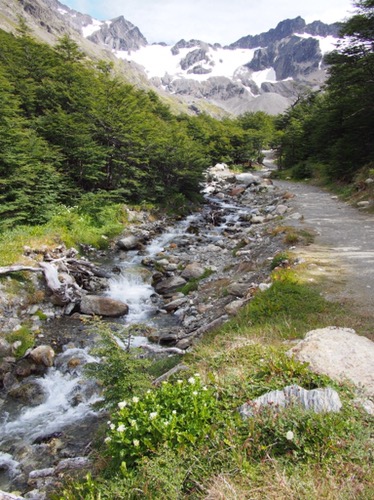 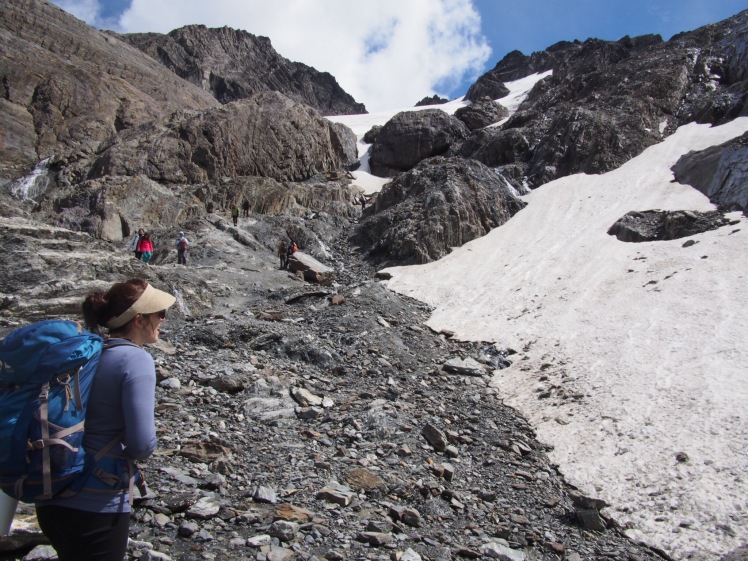 The second thing to do in Ushuaia is to take a boat tour of the Beagle Channel (named after Darwin’s famous boat that passed through here). The channel is home to king cormorants, sea lions, and… penguins! Many of you have asked for pictures of penguns, so let’s just cut right to the chase.

The Beagle Channel is home to a colony of 2,000+ magellenic penguins. 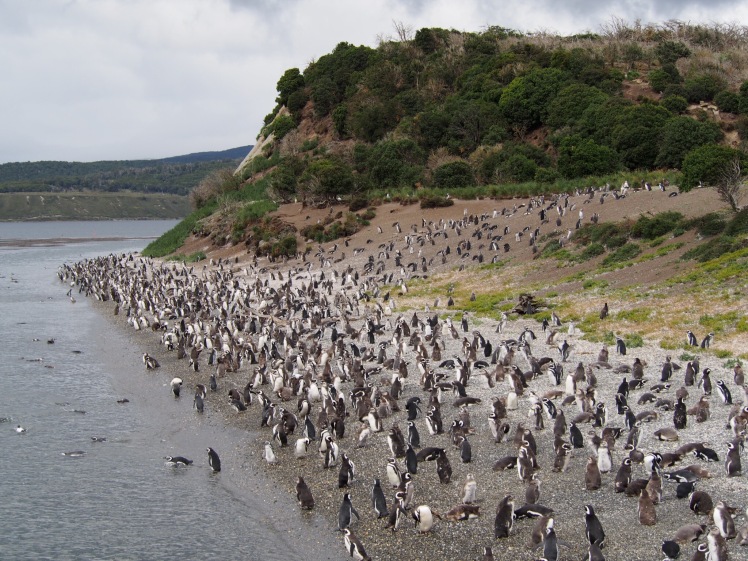 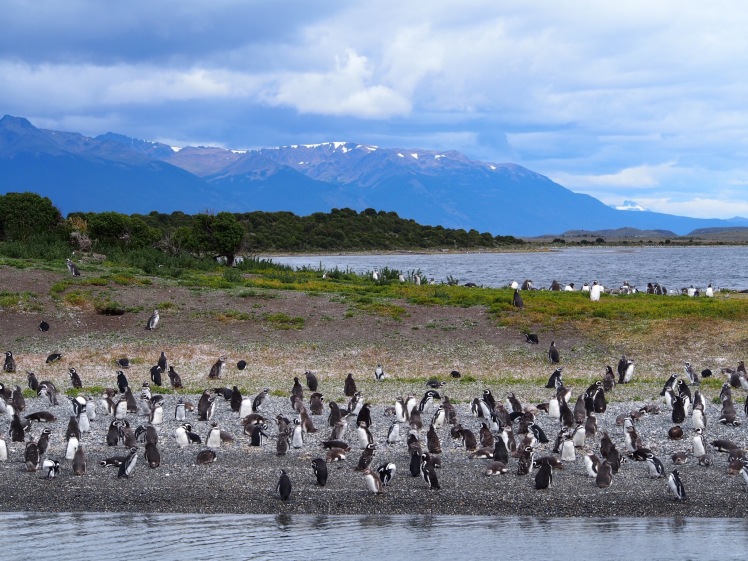 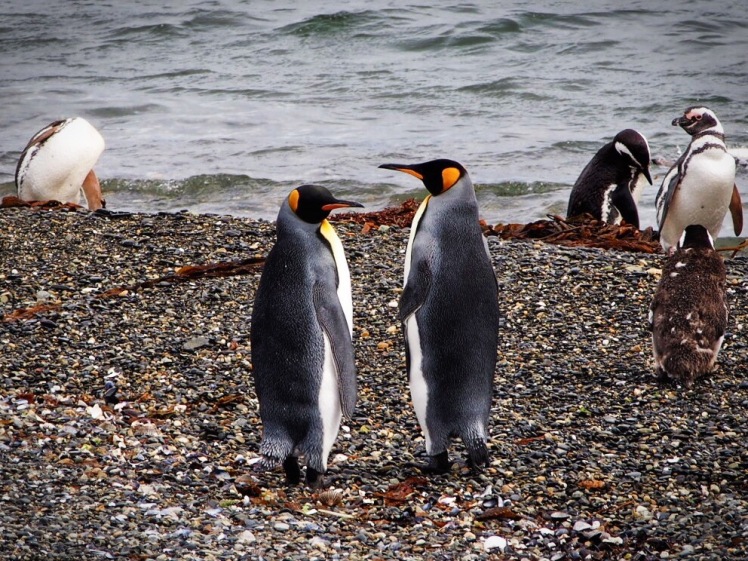 There are also about a hundred gentoo penguins here. 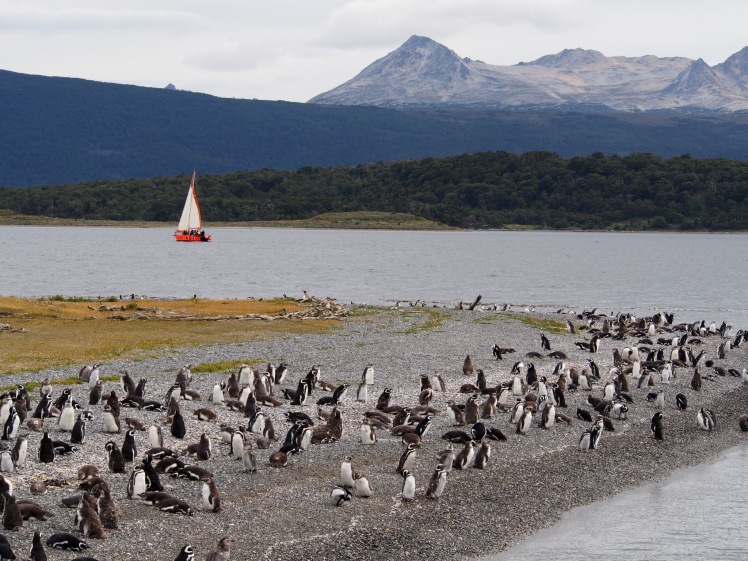 There’s a pack of sea lions. Here they’re called “lobos marinos” which translates to “marine wolves”. Sounds pretty bad ass, but then again so does “sea lion” when you think about it. 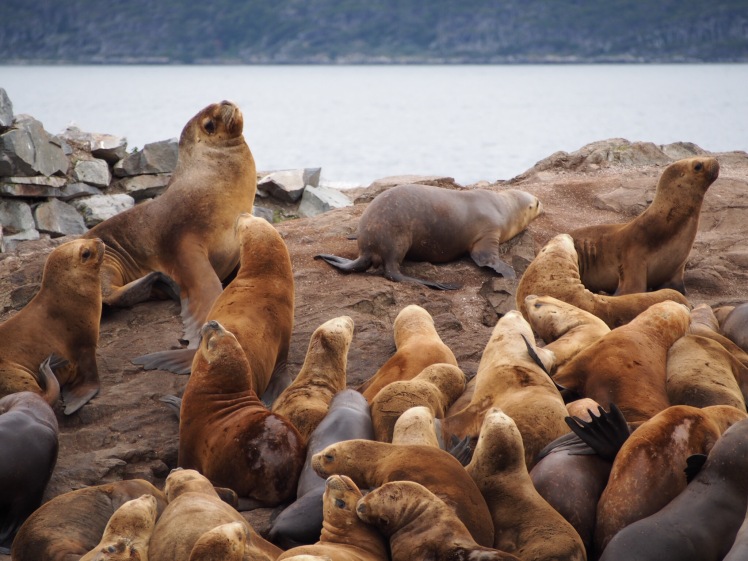 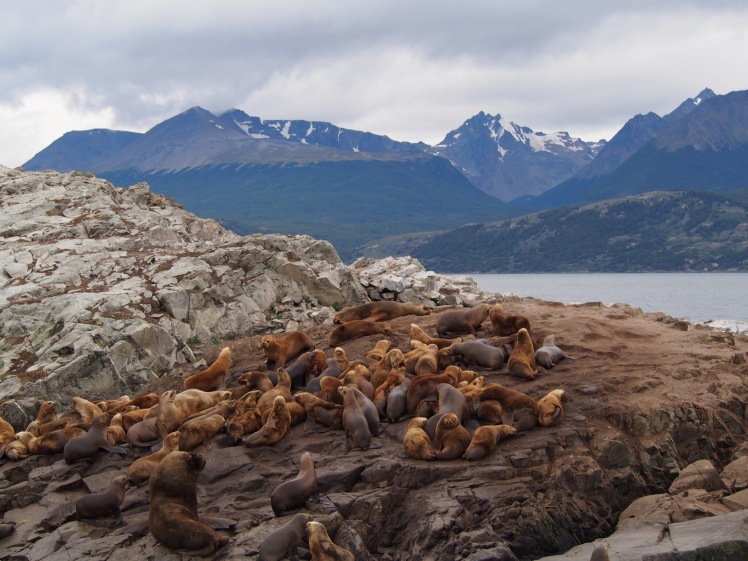 And there are thousands of king cormorants. They look like penguins, but don’t let them fool you! Tricky buggers. 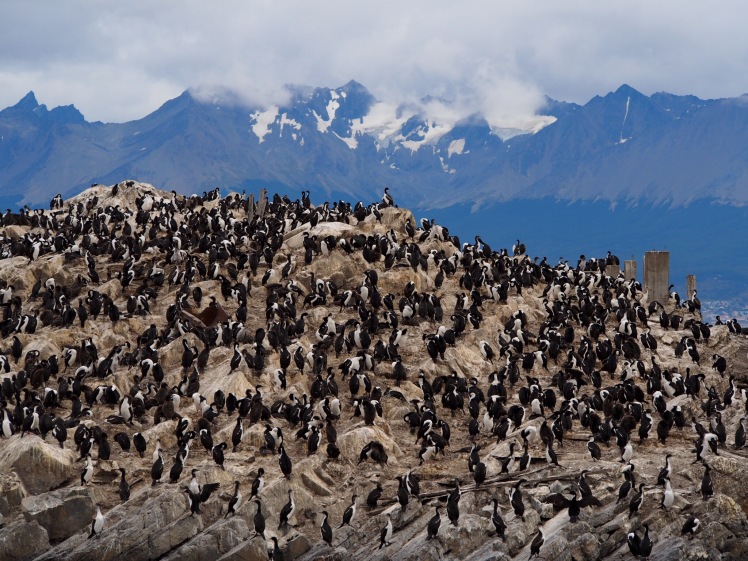 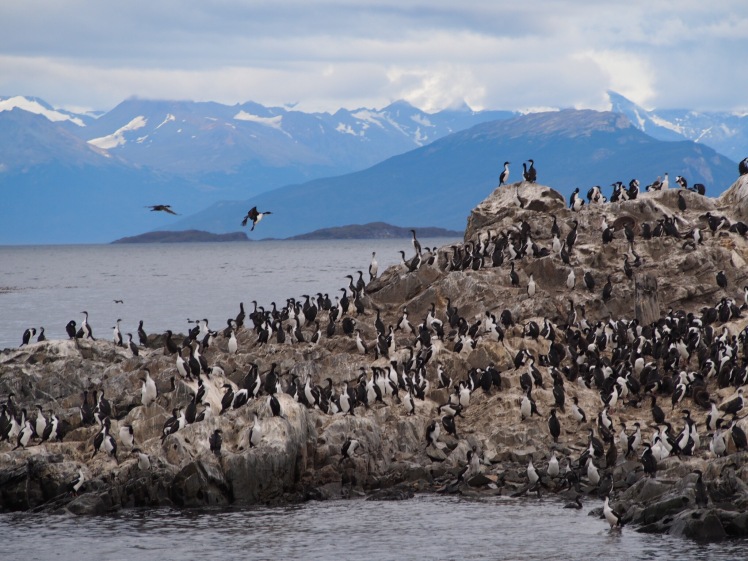 The third thing to do in Ushuaia is to travel to Antarctica. So that’s what we’ll be doing next. Just kidding! A cruise to Antartica costs upwards of $10,000 per person (for the cheap room) and takes two weeks. So maybe we’ll save that for our next adventure. 🙂

That wasn’t rain #snowsquall #boston
David and I started the year off right with a bicycle tour to the 8 @flourbakeryandcafe around Boston and Cambridge to complete the Flour Window Holiday Challenge. It was windy and cold, but the sandwiches, baked goods, hot chocolate, and pretty scenery made it worth it (oh...and the free pastries we’re trying to earn..). Happy New Year!
A few weeks ago, we spent a few days in Montreal while David was there for work. We got to stay with Olivier, who we met while staying at an eco-retreat in Costa Rica in 2018. It was so great to reconnect with someone we met while traveling. He even served us his hallmark breakfast of a ridiculously large bowl of fruit! And Montreal was pretty fun too! Thanks for hosting us @travel_is_a_book
One of my goals this year was to make an ice cream cake and, conveniently, my niece requested one for her birthday. Here it is with an Oreo crust, “birthday cake” icecream, crunchies, peanut butter cup ice cream, and whipped cream frosting. HBD to my favorite 11 and 14 year olds 😭 #jdncakes
What it looks like when we animal-sit in NH 🐕 🐈 🐈 (missing: video of the animals playing with the cat toys I made them to keep them entertained)
A few weeks ago we had the privilege of becoming the godparents of sweet baby Jackson. Here is his #jdncakes - tried out new buttercream frosting and whipped cream and strawberry filling. Swipe to see more pics - including the highlights of how cute he is 🥰