If you’ve been following us on Facebook or Instagram you’ve probably seen a bunch of pictures of glaciers. That’s because there are a lot of them in Argentina and they’re really cool (get it? cool… glacier… sorry). But if you’ve seen one gigantic mass of ice you’ve seen them all, right? Actually Argentina has about 40 glaciers and they’re all pretty different.

First let’s talk about the all-star glacier: Perito Moreno, which is outside the city of El Calafate and in Parque Nacional de Los Glaciares. It’s a favorite because it is very dramatic, you can trek across it, and huge chunks of the glacier regularly “calve” or break off into the nearby river. 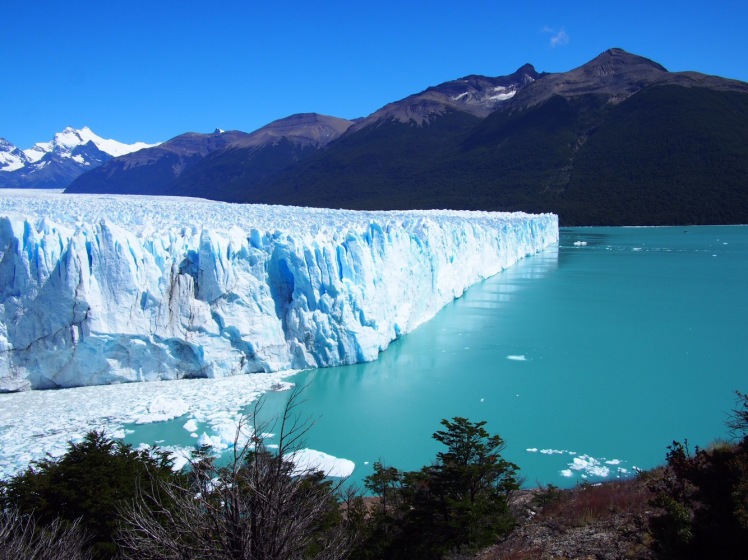 The Perito Moreno glacier is named after a famous scientist, explorer, conservationist, and politician. He’s a really cool dude who mapped out mountains and glaciers and even prevented a war between Argentina and Chile.

In a previous post we wrote about hiking to a glacier in Ushuaia. There are a lot more glaciers in El Chalten, which is in southern Patagonia. We spent five days here and hiked an average of 16 miles per day each time we went out. El Chalten calls itself the “Trekking Capital of the World” and with good reason! You don’t even need to leave the city to get to some amazing hikes.

It was not possible to carry enough water for these long hikes, so we would drink the glacial water. Before you get too worried, the water is totally pure. It doesn’t even have salt in it! So you have to eat salty foods in order to keep an electrolyte balance in your body. And there are no animals high enough up into the glaciers to pollute the water. It tasted delicious and very cold (obviously).

Sometimes the lakes and rivers made by the glaciers were blue or a milky white. This is caused by the glacier pulverizing rocks as it moves through the mountains. It grinds the rocks into “glacial flour” and when that mixes with the water it’s called “glacial milk”. The blue color seemed unreal.

So you might be wondering, what exactly is a glacier anyway? In short, it’s a huge block of ice, but really it’s more interesting than that. When snow forms high up in the mountains (like it does here in the Andes) it gets really dense. The weight of the snow on the top crushes the snow on the bottom. Once it gets to a certain depth, the snow on the bottom is smashed into super dense ice. There isn’t even any air trapped inside the ice because the weight of all that snow pushes it out!

As the glacier gets heavier it starts to slowly slide down the mountain. It’s not an avalanche, it only moves a few inches per day or per month or even per year, depending on the glacier. When it moves, the weight of all that ice grinds the rocks into powder. This strips mountains and forms new valleys. This is how a lot of the world as we know it was formed, including the landscape of New England!

So that’s your science lesson of the day. Glaciers are awesome and we’ve enjoyed seeing them, walking on them, and even putting them in our whiskey!

One thought on “What’s Cooler than Being Cool? Glaciers.”

Happy 70th Birthday Dad! And Happy Mother’s Day Mom! This #jdncakes is a white cake with coffee buttercream and crushed Oreos. Enjoyed a game of golf 🏌️‍♂️ and picnic at the park to celebrate.
A little bit of forest therapy this past weekend.
The sun after the rain at a brewery in NH this weekend.
Raymond Ravioli and Frances Fettuccine, our neighborhood turkeys 🦃 haven’t seen these guys in quite a while and didn’t even see Frances up on the roof in that first picture until he jumped to the next roof #urbanjungle #southieturkeys #howdidyougetupthere
Little visitor to the big city gets a big donut 🍩 #kanesdonuts
Donating blood is fast and painless. It’s an easy way to volunteer and the need for blood is constant. You have good stuff that other people need. Consider donating blood and ask us if you have any questions!