The first stop on our adventure was Mexico City. We’ve always heard great things about this city and it did not disappoint!

The first thing to know about Ciudad de Mexico (written everywhere as CDMX) is that it is muy grande. About 9 million people live here and it covers 573 square miles. Add in the suburbs and that number balloons to 22 million people. That’s about ten times the size of Boston and three times the density. As you might expect with a city this size, there are a ton of great things to do. We spent a week here and left with a “to do” list larger than when we arrived!

On our first full day we joined a free walking tour through Estacion Walking Tours and saw the sights in the center of the city. There is some amazing Art Deco and Art Nouveau architecture here. 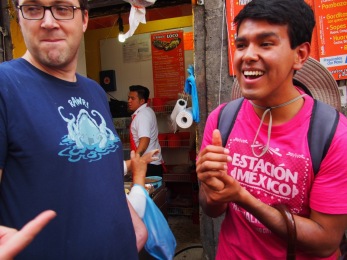 Our tour guide, Miguel, was full of smiles and history

The Mexico City post office. Not a bad place to pick up some stamps!

The Pallacio de Bellas Artes, the Palace of Fine Arts

At the heart of everything is the Zócalo, a big plaza and gathering place. It’s surrounded by a huge cathedral, several government buildings, and the ruins of a gigantic Aztec temple called El Templo Mayor.

Mexico City sits on the site of Tenochtitlán, which was the capitol of the Aztec empire. Back then the city was actually an island in an enormous lake. The Aztecs built roads and aqueducts that led to the island. The remains of all those things are still visible in the city and there are ruins underneath many of the buildings!

The next day we visited the Museo Nacional de Antropología (National Anthropology Museum) which is something that you absolutely must see if you come to Mexico City. It houses an amazing collection of art and artifacts from the Mayans, Aztecs, and other civilizations that lived here.

The Aztec Sun Stone. Warriors used to fight to the death while standing on this.

A book of hieroglyphics. I like to think of it as an early comic book. 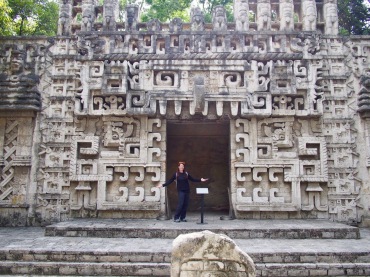 A recreation of an ancient temple at the museum

We took a trip to see Frida Kahlo and Diego Rivera’s house, Casa Azul. It’s been turned into a really interesting museum that houses many of Frida’s paintings and dresses. The house resides in the neighborhood of Coyocán, which is a lively bohemian place with a big park, street fairs, and good restaurants.

Coyocán means “Place of the Coyotes” in Mayan 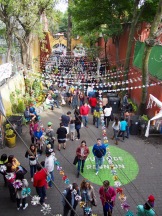 Traditional Aztec dance. This huge group wasn’t busking for money, they were just boogie-ing down.

Jenny trying out a Frida impression at Casa Azul 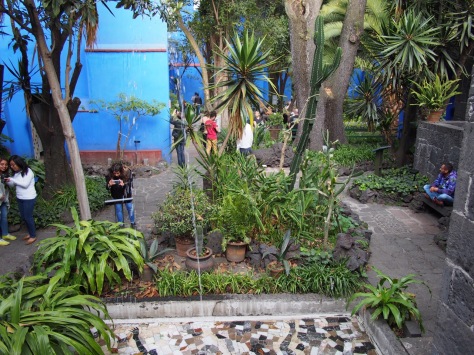 In a place with over one hundred museums it would be pretty easy to spend all our time visiting them, but you’ll have to wait for the next posts to find out what else we did in Mexico City!