Our first full day in Valladolid (pronounced “vye-a-doh-leed”), was one of our busiest, and funnest days.

First, we visited Casa de Los Venados, which is an 18,000 sq ft redone house museum in the historical center that is owned by an eccentric older couple from Chicago. Outside of being a gorgeous home architecturally, it houses over 3,000 pieces of Mexican folk art. 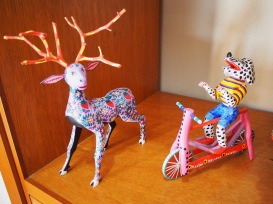 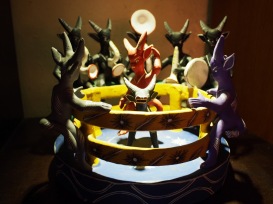 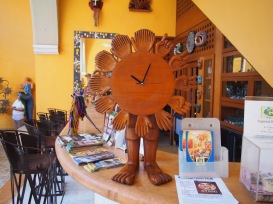 Can you give me a hand and tell me the time? 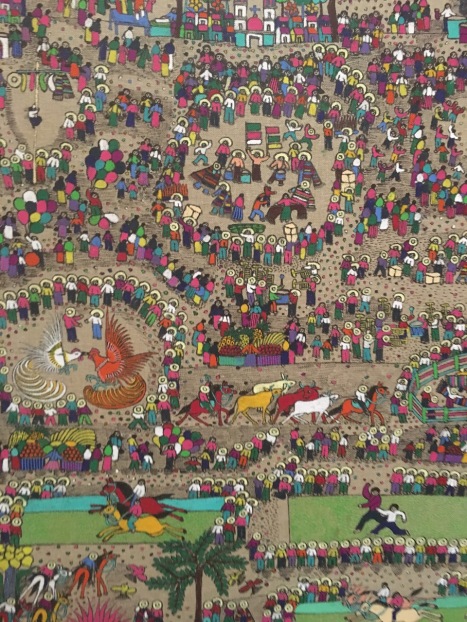 I just love the colors!

We went on an hour long tour in Spanish and met the owners, who actively live there, but allow house tours at 10:00am everyday (and collect donations for entry to support the local community).

A bridge over the pool. In their house. 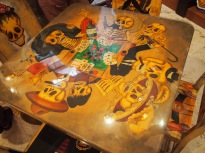 This card table would fit in well to our family.

Now this is outdoor living!

Check out this ceiling!

Then, we rented some bikes and headed 5 kilometers out of town to out to Hacienda San Lorenzo Oxman. It’s an old plantation that how houses a restaurant, pool, and a cenote (more about that in a second).

Entering into the abyss – what’s down there? 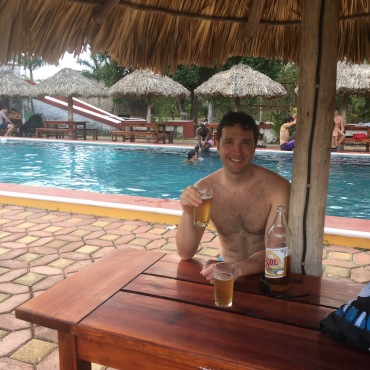 Enjoying a “misil” (missle) of beer as we wait out the rain.

At the Hacienda we visited our first of 3 cenotes (pronounced “say-NO-tays”) for the day, which is sort of like an underground river/pool in a cave that is now accessible in some degree because the part of the roof has caved in. There are over 6,000(!) of them on the Yucatan peninsula and were the primary source of water for the large Mayan cities that filled the peninsula. Now, they are beautiful swimming holes with crystalline water.

Not only was this cenote beautiful, it had a very fun rope swing.

Then, in slow motion: 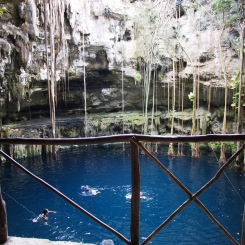 View when you walk in

The stuff hanging down are the roots from the trees above

View looking down from above

Next we headed out toward two side-by-side cenotes, in which we somehow managed to route ourselves through the town dump. On the plus side, we got to see vultures up close. And did eventually get there.

One of the cenotes, X’KeKen only had a small sunroof and was otherwise a dark cave (with lights installed).

The other cenote, Samula, was a little more inviting. It had a little island that is made from the rocks that caved in from the ceiling.

All of the cenotes are filled with small and medium sized black catfish – who are pretty cute, blind, and seemingly oblivious to us because we nearly swam into them several times.

All in all, it was a great day – followed by a quick nap and dinner!

I don’t start work until 10:00am on Wednesdays so I’ve decided to start every Wednesday with a hike with Maui in the woods. This feels luxurious and yesterday was a glorious spring morning. We’re both so happy when we’re out there. The last few pictures are of him refusing to leave the park - I eventually gave up and carried him into the car. All I could think of was a typical kid saying “c’mon mom, 5 more minutes, pplleeeaaassseeee”. #mrmauiwowee
Enjoy pictures of adorable #mrmauiwowee on National Puppy Day. I love this little animal! 🐕 🐾
Maui loved his play date with his brother Oliver, who lives nearby in Newton, this weekend! He is one of 9, so we’re looking forward to meeting up with more of his siblings! #mrmauiwowee
Maui living his best life. #mrmauiwowee
We have a snow dog! ❄️ 🐕 🐾
We bought a house in Jamaica Plain over the summer so that we could get a dog and it finally happened! Introducing, Maui the Dog! He’s the sweetest little puppy that already has us wrapped around his adorable little paws. Get excited for frequent puppy pictures! #mauzerthedog #mrmauiwowee