The city of Guanajuato (gwon-a-HWAH-toh) is the capital of the state of Guanajuato. It’s a 4.5 hour/$27 bus ride from Mexico City, or a 30 minute/$22 cab ride from Leon International Airport. It has a population of about 72,000 people and is considered a university town. It’s also a UNESCO World Heritage site.

It’s a beautiful city that’s built in a valley/into the nearby mountains. The historic center only has 2 roads for cars, with the rest of the roads out of the center or in underground tunnels. We got around mostly on foot, winding through callejones (alleys) and pedestrian streets. The city was founded as a silver and gold mining town, and there are still active mines there today. There is also a lot of history here relating to the start of the Mexican war for independence from Spain in 1810. The unique geography and colorful buildings, as well as several colonial churches make it a fun place to just wander around. It’s not as picture perfect as the nearby, more visited San Miguel de Allende (sometimes referred to as the Disney of Mexico for it’s castle-looking church and the plethora of older Americans/Canadians), but it feels a little more like authentic Mexico.

View of town from the hill 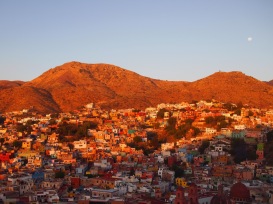 the sun is setting

from the Pilipili monument

We really enjoyed our 5 nights there, which included part of Semana Santa and Easter, which is when most of Mexico is on vacation (and seemingly in Guanajuato!).

Some of the things we did that we recommend if you go:

Callejonada: A callejonada is sort of like a roaming street party led by musicians clad in 17th century Spanish costumes, with stops for telling jokes, singing traditional folk songs and telling legends and stories of the Callejones (the little alleyways that run through the city). It last for a little over an hour and tickets are sold by people on the street. It’s whacky, but a really good time.

Ex-Hacienda San Gabriel de Barrera: An old fancy house and grounds. The house is a museum surrounded by 17 delightful gardens. It’s worth hiring the on-site guide for a 20-30 minute tour of the house to get an understanding of the history before wandering around the gardens.

Don Quijote Museum: The town seems to have an obsession with Don Quijote and Cervantes, with statues/sculptures everywhere and an annual international theater festival (called the Cervantino). We didn’t understand why until we went to this museum and got the explanation – I’m not going to explain it here but recommend checking out the museum – it only takes maybe an hour.

Los Campos Restaurant: Owned by a Mexican-Canadian couple, this place serves delicious food and drinks – maybe I would describe it as upscale Mexican or Mexican with a twist. We went twice. Get reservations (which I made over Facebook messenger but you could stop in too).

Food/walking tour: We did a street food walking tour that was supposed to be 3 hours and ended up being close to 5. It was lead by an American who has lived there for nearly 10 years and included visits to a variety of markets and street stalls. The food was good and stuff we still hadn’t had, even after 2 months in Mexico, but the best part was that it was also a tour of the town that included a lot of the history.

Wander around: I loved just walking around aimlessly, stopping in plazas and getting lost in the alleys , though I would usually turn around if I started going uphill too much. There is a plethora of churches that we popped into (on Holy Thursday, which is when Catholics traditionally pilgrimage around to 7 churches in the area).

Teatro Juarez: a beautiful building on the outside that opened in the early 1900s, it doesn’t cost much to pop in for a few minutes and check out the old theater.

Funicular: The funicular takes you up to the top of one fo the hills for an amazing view of the town, and up close with a monument. For us, it also took us to and from the center each day because our house was at the top of the hill!

Day trips: We didn’t do this because we’re lazy, but you can take a day trip to Dolores Hidalgo (1.5 hours by bus). It’s supposed to be a picturesque town that has a lot of history relating to the war for independence. San Miguel de Allende (1.5 hours by bus) is also an option for a day trip, though we actually did a 3 night visit there. Queretaro is also supposed to be nice, but maybe a little too far for a day trip.

Lastly, because it was a busy vacation week, there was a shortage of budget places to stay, so we splurged on our most expensive and fancy place yet: Casa Zuniga. This bed & breakfast, owned by an older American couple, is built into the top of the hillside, at the top of the funicular. We spent a lot of time just looking at the view (taking a million pictures), swimming, and enjoying an amazing breakfast every morning. The $75/night was a stretch for our budget on a 3 month trip, but very reasonable for people on a traditional vacation. 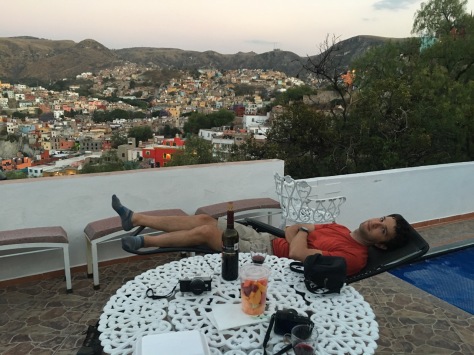 Fruit, wine, and R&R on the deck 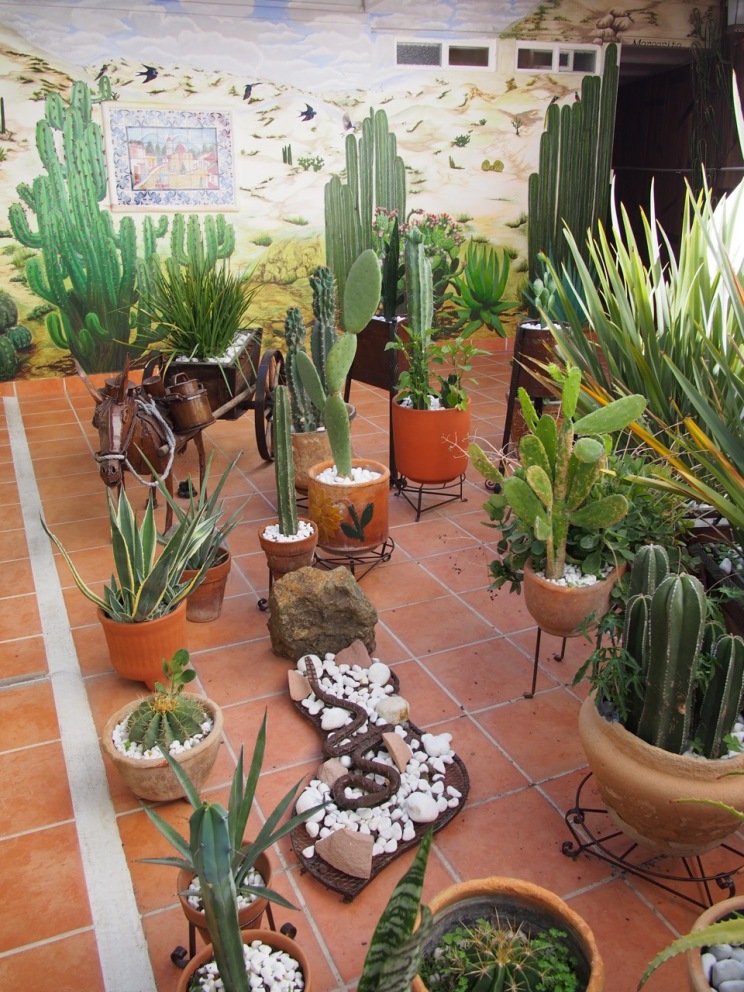 The garden patio outside our room

3 thoughts on “A Travel Guide to Guanajuato”

Got a good haul of mountain blueberries 🫐 on Mount Kearsarge today.
Cupcakes for my sister-in-law’s jungle safari-themed baby shower. White and chocolate cupcakes, coffee frosting and cookies and cream frosting. Yum! #jdncakes
Happy 70th Birthday Dad! And Happy Mother’s Day Mom! This #jdncakes is a white cake with coffee buttercream and crushed Oreos. Enjoyed a game of golf 🏌️‍♂️ and picnic at the park to celebrate.
A little bit of forest therapy this past weekend.
The sun after the rain at a brewery in NH this weekend.
Raymond Ravioli and Frances Fettuccine, our neighborhood turkeys 🦃 haven’t seen these guys in quite a while and didn’t even see Frances up on the roof in that first picture until he jumped to the next roof #urbanjungle #southieturkeys #howdidyougetupthere