When we travel, we meet a lot of people through hostels, tours, classes, and shared transportation. Many of them become fast, intensive friends for a few days. We exchange contact information, then never see each other again, despite best intentions.

Back in January 2012, 8 years ago, we flew to southeast Asia for our first big trip, spending 2 months in Singapore, Thailand, Cambodia, & Laos. Taking a cooking class is something we try to do in every country as a way to learn the culture and food and meet people and we started this tradition a few days after we landed in Chiang Mai, Thailand. I was so anxious I didn’t really want to leave our guest house for the first few days because everything was so foreign – it was overwhelming. 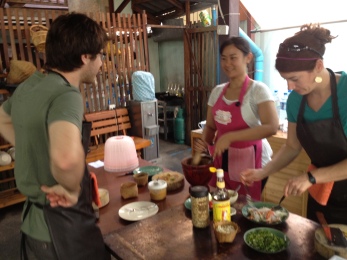 The cooking class helped ease me in, allowing me to ask stupid questions I didn’t know who else to ask. Our teacher was Palm, a girl close to our age who we became fast friends with. We ended up spending a few weeks in Chiang Mai and during that time we had drinks with Palm, she drove us to a park outside the city for a waterfall hike and picnic, and we eventually went to her parents house and stayed the night after visiting a festival at her temple. Talk about cultural immersion! We were way out of the tourist zone and definitely the only farangs (foreigners) there.  David was a solid head taller than everyone else. It was a little intimidating (“what do I do? Do I bow? Please don’t like me break some cultural expectation and embarrass myself or my host…:”). It was really cool to have such an authentic experience – and Palm was a fun friend!

We friended each other on Facebook, then left Thailand, hoping we’d one day go back and see Palm.

Last year Palm posted a picture of herself and her son at Fenway Park in Boston. I immediately sent her a message and said “Holy cow Palm! Are you still in Boston?! We live in Boston!!! We’d love to see you if you’re still here!”. She wrote back with the craziest reply.

“I actually live here now. You’ve probably never heard of it, but I moved with my husband to a place called North Attleboro.”

For those of you that don’t know, David and I grew up in Attleboro (the next town over) and our families still live there.  It took a little while, but we finally met up with Palm.

What are the chances that someone you met literally on the other side of the world 8 years ago moves practically to the town you grew up in? It’s a small world indeed.

It was good to see Palm and she invited us to come to her house for some Thai food sometime and we’ll need to have her up and cook for her too.

We celebrated the birthday of #mrmauiwowee with 4 of his siblings this weekend. The celebration included this #jdncakes - a two layered naked cake with peanut butter filling and peanut butter cake, decorated with @milkbone They loved it!
Happy Birthday 🎉🎂 to this little animal 🐕 ! We love you #mrmauiwowee - one year old! And 6 months since we got you!
Love that dirty water ⛵️
I don’t start work until 10:00am on Wednesdays so I’ve decided to start every Wednesday with a hike with Maui in the woods. This feels luxurious and yesterday was a glorious spring morning. We’re both so happy when we’re out there. The last few pictures are of him refusing to leave the park - I eventually gave up and carried him into the car. All I could think of was a typical kid saying “c’mon mom, 5 more minutes, pplleeeaaassseeee”. #mrmauiwowee
Enjoy pictures of adorable #mrmauiwowee on National Puppy Day. I love this little animal! 🐕 🐾
Maui loved his play date with his brother Oliver, who lives nearby in Newton, this weekend! He is one of 9, so we’re looking forward to meeting up with more of his siblings! #mrmauiwowee
Join 59 other followers